Minimalist Architecture – The Art of Simplicity

Minimalist architecture is characterized by clean lines and simple forms. It is often associated with mid-century modern design, but it can be found in a variety of different styles. In this article, we’ll take a look at the history of minimalist architecture and explore some of its key features.

The history of minimalist architecture began in the early 20th century with the Bauhaus and the De Stijl movement. De Stijl, which means “The Style” in Dutch, was a group of artists and architects who sought to simplify and abstract art and design.

The minimalist aesthetic of the Bauhaus can be seen in all aspects of the school’s design, from its architecture to its furniture to its typography. The Bauhaus masters believed that form should follow function, and that all superfluous decoration should be eliminated.

These movements influenced architecture by promoting functionalism, a lack of surface decoration, and rectilinear planes. In 1947, after the Bauhaus relocated to the United States and became known as the International Style, its famous architect Ludwig Mies van der Rohe summarized its minimalist philosophy in a trademark phrase: ‘Less is more.’

If you want to learn more about how minimalism evolved in art, I recommend the following article: Exploring Minimalist Art – All You Need To Know

The characteristics of minimalist architecture

In minimalist architecture, form follows function. This means that that buildings should be designed using only the necessary elements, and that each element should serve a purpose. This philosophy results in clean, uncluttered designs.

The emphasis on simplicity is one of the hallmarks of minimalist architecture. Designs are typically clean and uncluttered, without unnecessary ornamentation or complex details. Natural materials are also often used, such as wood, stone, glass, and metal.

These materials help to create a sense of harmony and balance. Open floor plans are also a key element of minimalist architecture, allowing for a free-flowing space without walls or partitions. Geometric forms, such as squares, rectangles, and circles, are often utilized to further this sense of harmony.

There are many famous minimalist architects, some of the most renowned are Le Corbusier, Mies van der Rohe, and Philip Johnson.

Le Corbusier was a Swiss-French architect who was one of the pioneers of the modernist movement. He believed in using simple, clean lines and geometric shapes in his designs. His most famous works include the Villa Savoye and the Chapel at Notre Dame du Haut.

But one of the most influential figures in minimalist architecture was German-born architect Ludwig Mies van der Rohe. He rejected the traditionalist approach to architecture, opting instead for a focus on modern design principles such as simplicity, harmony, and clarity.

Looking at the architectural works, one is amazed by the timelessness of minimalist architecture, as if they were built only a few years ago – a true testament to their incredible timelessness. 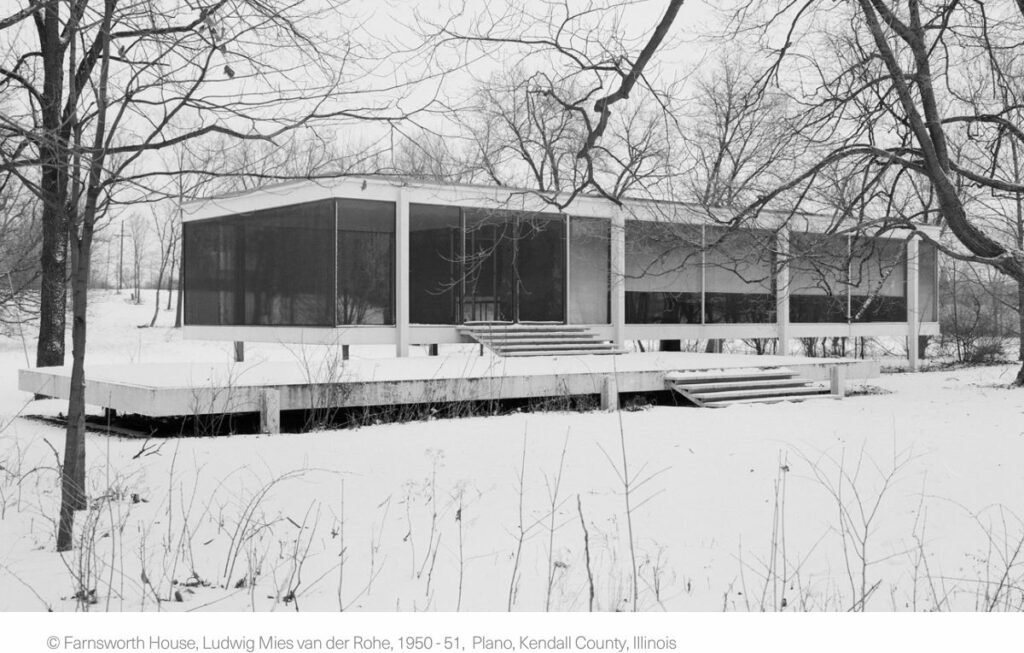 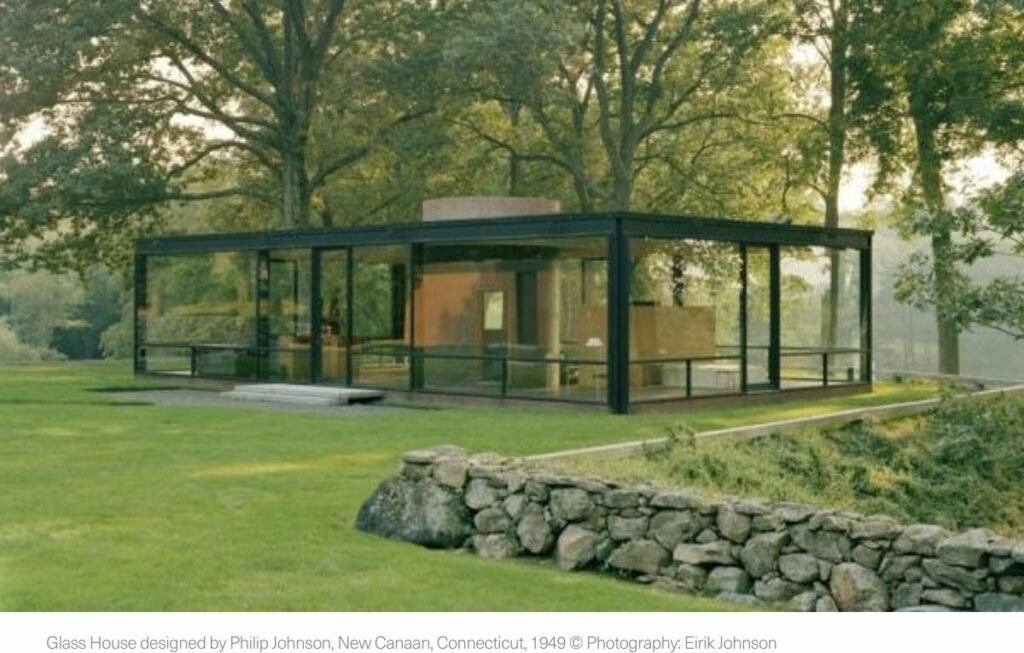 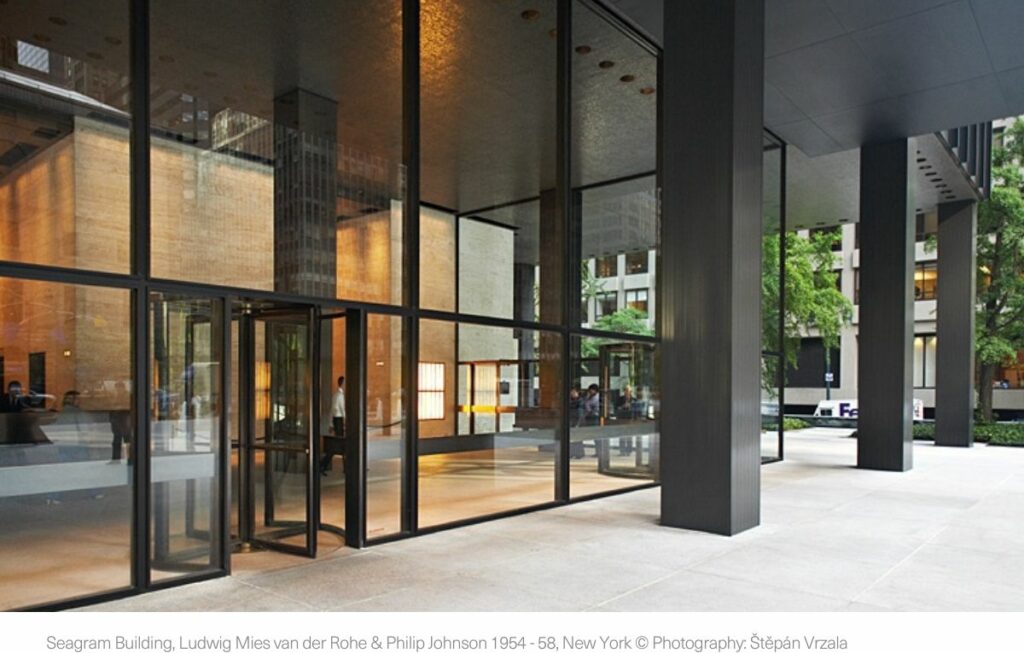 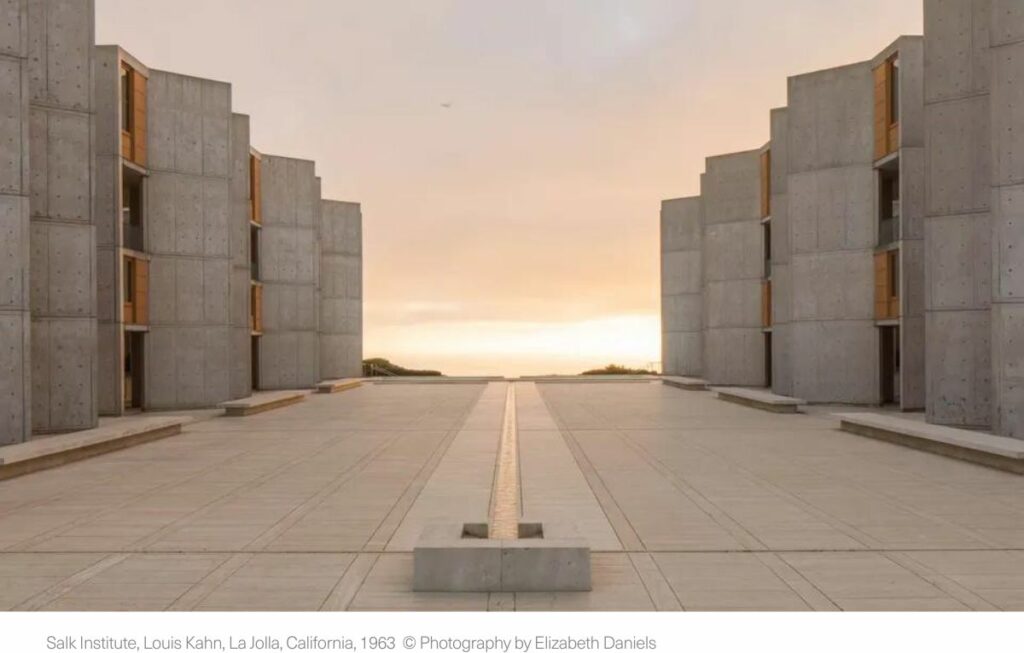 His buildings, such as the iconic Seagram Building in New York, embody this minimalistic approach with their stripped-down, rectilinear forms and lack of ornamentation. My favorite buildings from van der Rohe are definitely the Barcelona Pavilion in Barcelona and the Farnsworth House in Plano, Illinois.

The seminal work of Mies van der Rohe was deeply influential in the development of minimalist architecture. His influence can be seen in the work of other important figures such as Philip Johnson, Louis Kahn, and Richard Neutra.

In particular, Johnson adapted Mies’ principles to create open-plan designs with a focus on light and natural materials. These architects sought to create buildings that were simple and elegant, yet still provided all the necessary amenities a modern building requires.

Nowadays Tadao Ando, John Pawson, David Chipperfield, Vincent Van Duysen, Fran Silvestre Architects and Peter Zumthor are some of the most well-known representatives of minimalist architecture today. Each of these architects is renowned for their clean, modern designs and often incorporate concrete and glass in their designs, as well as a simple yet elegant minimalism aesthetic.

My favorite books* on minimalist architecture

So what makes minimalist architecture so special?

In my eyes, it’s the simple fusion of structure and nature, of form and function. The work of renowned minimalist architects is a testament to their ability to harmoniously blend the built environment with nature, making it an essential part of their creations. Their designs are not only visually appealing, but also timeless. By striking a perfect balance between form and function, minimalist architecture stands the test of time.

*Affiliate Links: If you purchase something through one of the links, Aesence may receive an affiliate commission. You won’t have any extra costs, but you’ll support Aesence.

Aesence is a creative studio and digital design magazine with a high curatorial approach. Founded by Sarah Dorweiler, a creative mind and entrepreneur from Berlin, her goal is to capture the feeling of harmony, balance and inner peace in her curatorial work and photography.

Join a community of over 20,000 aesthetes and stay up to date beyond the bubble of mediocrity.